Black College Player of The Year

The
Black College Football Player of the Year Award is presented annually to the most outstanding football player from a Historically Black College & University.

The Bowie State junior quarterback was presented with the Deacon Jones Trophy on Feb 10th. Hall has had an amazing career with Two-time 1st Team All-Conference (CIAA) – leading the Bulldogs to a 9-2 regular season record and a berth in the NCAA Division II playoffs. He threw for 3,519 yards and 41 touchdowns in 11 games. He completed 65 percent of his passes while throwing just four interceptions in 381 attempts, leading the nation’s top Division II offense. Hall accounted for 294 points between passing and rushing touchdowns. We would say well deserve! 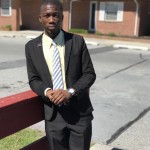