On Wednesday August 21st, 2019, 17 -year-old Dawnta Harris was sentenced to life in prison for the murder of Officer Amy Caprio.

Harris defense attorneys had urged the judge to give him 30 years for murdering Caprio back in May 2018. He ran over Officer Caprio in a stolen Jeep Wrangler while his friends were burglarizing homes in Perry Hall. When Caprio approached the Jeep, his friends were inside or behind the home.

Harris asked the Circuit Judge Jan Marshall Alexander for a second chance in life. A defense attorney read aloud his six-page letter to the judge.

“I didn’t want to harm Officer Caprio at all; I just wanted to get away,” Harris wrote. “From the bottom of my heart, I thought she was going to move.”

He pleaded for mercy during the hearing. Attorneys argued over Harris’ fate for nearly two hours. Caprio’s widowed husband, Tim Caprio, told the judge of his searing grief.

“I wake up and wonder what the hell is the point of getting out of bed?” said Tim Caprio, his voice cracking. “There is a massive hole and emptiness in my heart.”

“Nobody here is happy today,” State Attorney Scott Shellenberger said. “All of us would rather have Amy here with us. But we do feel like justice was served.”

The morning hearing came to an emotional end for the murder case against Harris. The 17-year-old was convicted in May for the killing of Amy Caprio. Her tragic death drew attention from around the world, including some from the White House. The murder of a white police woman by a black teenager sparked a racial debate.
Prominent Baltimore attorney Warren Brown took up the teen’s defense free of charge. During the trial, Brown mentioned that he felt compelled to help Harris after a comment online saying “string him up by the testicles”.  He was not surprised about the sentencing.

“It wasn’t unexpected,” Brown said, outside the courthouse. “The judge was under a lot of pressure.”

Brown said that they will file an appeal, which is the routine when life sentences are given, especially in cases when the defendant are so young.
Deputy State’s Attorney Robin Coffin put forward Harris’ juvenile record of stealing cars and small-time drug deals. His mother could not rein him therefore she asked Baltimore City officials to him in juvenile detention, Coffin mentioned.

Caprio had received a dispatch to investigate a suspicious Jeep spotted in Perry Hall. When she arrived on a suburban cul-de-sac, she saw Harris behind the wheel.

She blocked his way out using her patrol car, then she jumped out and ordered him to stop. Harris then sped toward her and she drew her gun, screaming, “Stop! Stop!”

During the trial, jurors watched Caprio’s body camera footage. Harris stopped the Jeep and cracked the door as if he was surrendering. Harris then ducked down and gunned the Jeep. Caprio fired once through the windshield, missing him right before he ran her over.

Harris ditched the Jeep nearby and proceed to walking down the street when arrested. During a 14-hour interview with detectives, Harris admitted that he panicked.

“Once I seen the gun, I put my head down and closed my eyes,” he told them. “It was like five seconds before I pushed on the gas.”

Neighbors found Caprio bleeding in the street suffering from broken ribs and injuries to her internal organs with tire marks across her legs.

While Harris was in jail awaiting trial, he was cited for graffiti, pornography, threatening another inmate and cussing out the guards, Coffin said to the judge on Wednesday. She stated that Harris once said, ‘F*** that pregnant b****. I hope someone beats the s*** out of her.”

Coffin went on to say Harris has no concern for consequence as well as law and order. She also stated that his actions deserve the sentence of life.

Harris will be eligible for parole after he serves 15 years, even though State Attorney Shellenberger said inmates convicted of murder usually spend more than 30 years behind bars. 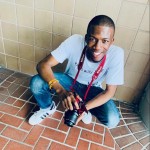