Kwame Onwuachi, a James Beard Rising Star Chef Award recipient, explained that during Kith/Kin’s closing from March to June, he was able to self reflect on what was important to him. During that time, Chef Onwuachi settled back in his hometown in the Bronx, working with World Central Kitchen preparing meals for emergency medical workers in the Mott Haven community. After Chef Onwuachi returned to D.C. for the reopening of Kith/Kin and determined his path was to pursue ownership.

“Something that profits off of Black and brown dollars should be Black-owned. It’s Something that’s very, very important to me, and Something that I want to achieve in the future.” – Chef Kwame Onwuachi

Kwame Onwuachi has decided to resign from Kith/Kin to pursue his opportunities working as a chef; he owns himself.

Paola Velez, the executive pastry chef, resigned last week from Kith/Kin along with Chef Onwuachi. Paola Velez is one of the originators for the Bakers Against Racism movement.

Paola Velez and Willa Pelini, chef at Emilies in Capitol Hill, came together to jumpstart the Bakers Against Racism initiative. It all began with Pelini donating a dessert to Velez’s pop- up donut shop, and suggesting to send the earnings to Black Lives Matter. From there, the duo went further by coordinating a worldwide bake sale that has captured the attention of many bakers stretching from the U.S. to Australia. Velez informed the N.Y. times the Bakers Against Racism initiative has raised nearly 1.9 million dollars!

Paola Velez stated that the recent protest and senseless killings of Black people by the police caused her to re-evaluate her priorities. Chef Velez noted that she desires to “do things for the betterment of people”, and has since moved on from Kith/Kin to take on the top pastry positions at Maydan DC and Compass Rose DC. 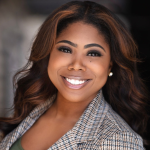 PEACE AND JUSTICE FOR AFRICA❤️

“If not now, when will you begin living your life?”