MAN, These two episodes are legendary, It shows you Michael Jordan the Human, His abilities are based of his mentality, if you are the type of person who likes to achieve something, A person who wants to be great and go against all odds to get that fuel that burns your fire, After you are done watching the episode you will feel like Damn, There is so  much You could do , You immediately feel like this supercharged and unshakeable person. That is what Michael does to you whatever he talks about is filled with so much passion and so much hunger behind his eyes, he does not want to quit , That person does not believe in quitting the fact that He could raise your level from distance, his legend is going to be bigger and bigger. He has set so many games inside big games that no one will be able to identify his true feelings, he weeps just like the rest of us. He has been broken a million times over his career but it was his obligation to make the other billion “Believe”.

2. JAMES JORDAN MAY HIS SOUL REST IN PEACE.

His father was responsible to facilitate the man Jordan became, He did everything right he made his son a global superstar By giving him the right knowledge to approach the “game of life”. He stood next to him right next to him from the start to reach those height’s. The media makes a human there entity when A person is a celebrity and everybody wants more of the dirt then to try to understand the reason’s or motivation’s behind a person’s whole existence. It was not right for the media to speculate Jordan’s personal life being directly related to his father’s murder. When someone is wounded no matter who that person is he/she is allowed to make mistakes, have people around him that do him no good ( that are life experience’s), have mental health issues, depression and so many other things that need to be considered when you are going to pass judgement’s on a person. The real issue is no one wants to approach a celebrity’s life as  similar as to everyone around us. We all have habits and things that are going to eventually irritate other people, but it was his money he earned it and chose to spend however he liked it. James Jordan was a great man! He gave his son the true wings to fly. Rest in peace sir. In my theory, There are always three sides to the story your side, my side and the truth. (Robert evans) After 1993, Jordan was trying to find himself losing someone who gave you a life and a life that is followed by billion’s around. He lost the heart to his process, In that specific period of time the media never let him get it back. All that suspension jazz was not a pretty sight, Why would an organisation kick out the player who made it all a movie on the global stage, I mean gambling? Common folks Business is much more darker then that, focus on the lives lost to feed your entertainment.

This might be the perfect case of a player playing different sports on a professional level being highlighted in front of the global public to see and critic. Let’s be honest, Yes his baseball career was nothing! But he did not go in the sport to be the best baseball player Michael Jordan to walk the earth, He went in as a son who wanted to fulfil his father’s dream of seeing his son play baseball, why is it so hard to accept? Sports Illustrated I swear that man made you a whole lot of money, For you to call him out on his worst and ignoring the fact that he will come back to where he belongs is disgusting. That is ultimate betrayal, you can’t feed of someone’s fame and make him feel absolutely worthless as a human. These were the exact words on the cover “BAG IT, Michael! Jordan and The white sox are embarrassing Baseball”. Damn, I mean you din’t even confront the man about his choices and what was his motivation, that is a low move to get negative publicity because you can’t post his championship cover’s anymore. Lazy journalism and ignorance. Minor league baseball? MJ even sold out those ballparks man you must be insane to think he is going to be baseball god in a season. ( he still hit 0.200 at the double- A level meaning a lot of major prospects did not accomplish that. ) if he wanted to he could have stick in there and worked it out! And we all know he could have. whatever you say that was a bad move and it is going to hurt them forever.

Lot’s of great players have come and gone in this fascinating bulls team and MJ Was the face ever since he came into the organisation as a rookie, His first team-mates before the game were snorting line’s and everything in between before the game, nobody had the winning mentality or hunger to win something, to create a legacy or to be the greatest team in history. MJ changed that he was an absolute A••hole when it came to bringing people to his level, he might have gone too far with his approach to handle thing’s and his emotions because he forgot not everybody has that unfazed mentality to compete and win on every occasion and every little thing. His motivation might have hurt his team- mates but it was all for a good reason someone had to be the bad guy to keep the focus on court and Phil Jackson( The man is a beauty) if anybody deserves credit for this organisation to be legendary one you have to give it to Mr. Jackson he is a proven genius. We saw all of it Steve Kerr getting punched, MJ embarrassing Scott Burell ( HEEEE!! Whooo !!!!hoooo. MJ IS A FUNNY guy He was trying so hard not to laugh) the fear factor of MJ was real, he might have been a jerk but it all makes sense now. He pushed you to be the greatest with him, he was an absolutely delightful teammate, you might see him negatively but he had good reason to be that way. The legacy might have been different. Toni kukoc was that one talent, that you would not believe made MJ and scottie jealous. He was certainly a very genius basketball player. Jerry krause really had a thing for him man.

Dennis Rodman he deserves a whole article( doing that one pretty soon) on himself he is one of the greatest to ever do it! People take him out because of his vulnerability but he is an amazing human inside out!

It’s been long time coming, we all know a little more about the legend himself. He is a great person he took over responsibility he did everything for that organisation and he still never was given the right importance and treatment and it was humanely impossible for him to ignore the build up to the thing’s.  Scottie Pippen should not have quit on his team when it is 18.4 seconds remaining on clock. That is one of the decision’s that he is going to regret, the emotions were real in this particular scene but man can you really blame him? He absolutely did everything he was a different breed too. Whatever the reason might be Scottie Pippen is that basketball great that you will want on your team no matter which era you are playing. The trio of MJ, Scottie and Dennis was a dream match, Dennis  never spoke a word to both of his teammates together off court but did all the talking on the pitch. MJ THE GREAT, Scottie the facilitator and Dennis the outcast. We need a movie on these characters together in a different reality .

“He wasn’t really a nice guy he may have been a tyrant. Well, that’s you. You never won anything look I don’t have to do this I am only doing it because who I am and That’s how I played the game that was my mentality if you don’t want to play that way then don’t play that way. Break.” ( classic Jordan) we should keep seeing this particular statement again and agin everyday! We cannot change who we are inside and our experiences make us the person we become, we try our best to be obliged to that fact’s and keep people happy but the responsibility he carried was a far fetched reality. He did it anyhow. You might see MJ in any light, or opinion or shape and form but you can’t deny one thing is that he inspired you to be great to be like mike! He was never perfect and never will be ,He will always remain the greatest to ever do it. He had a fire in his heart which contributed to a billion other pieces of wood to catch a glimpse of that fire. 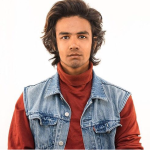 I dance, I act , I write.
Knowing me is the hard part.
Visit my Instagram profile @vancity_yash
Currently In vancouver.
Sports and Entertainment journalist for #Thedmvdaily.

Always Been For The People.