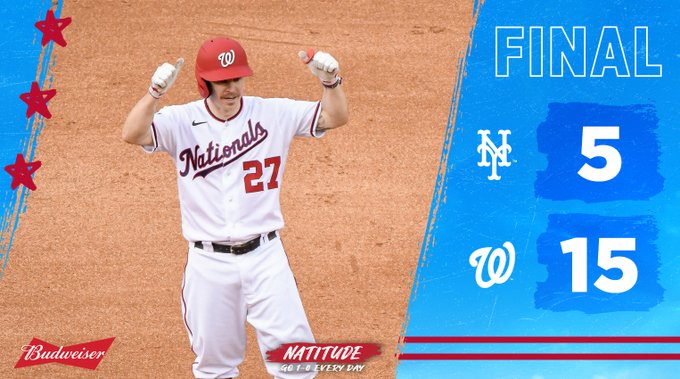 The Washington Nationals concluded their 2020 season on a high note with a 15-5 win over the New York Mets. The Nats finished the season winning their final three games all coming against the Mets.

Finding themselves down 2-1 at the end of the first inning, the Nats proceeded to score 11 runs in the second and third innings to take a 12-3 lead including a third inning grand slam by shortstop Trae Turner and a solo home run by catcher Yan Gomes.

The Nats would then score three runs in the sixth inning making the lead 15-4 going into the seventh inning on their way to a 15-5 victory.

Nationals right fielder Juan Soto won the batting championship in  the National League after finishing the season with a .351 batting average making him the youngest player in MLB history to do so. Soto was also named the Nationals Player of the Year by local media in the Nationals’ annual end of season awards.

The Nationals will not get a chance to defend their World Series title as they failed to make the postseason after finishing the season with a 26-34 record finishing last in the NL East. They have only made the postseason in back to back seasons once in their franchise’s history (2016, 2017).

Going into the offseason, the Nationals have a number of players who will go into free agency including Adam Eaton, Kurt Suzuki, Michael Taylor, Sean Doolittle and longtime Nats first baseman Ryan Zimmerman.

Not how we drew it up, but we're beyond proud of:

• This team
• This organization
• These fans
• This city

We fought together, even as 2020 threw us nothing but curveballs. That's something to hang our hats on.#NATITUDE pic.twitter.com/6kFz5OGLhr