Communities of Black people across the country are relying on each other, now more than ever, to unite and stand against racial inequality and injustice. Days long protests are taking place in all 50 states amid the unlawful murder of 46-year-old George Floyd by white Minneapolis, Minnesota officer, Derek Chauvin, who held his knee to Floyd’s neck long enough to kill him.

The popular ice cream maker, Ben & Jerry’s, took the cake with not only their company statement regarding the death of George Floyd, but also with their long-standing support of the Black Lives Matter Movement.

“What happened to George Floyd was not the result of a bad apple; it was the predictable consequence of a racist and prejudiced system and culture that has treated Black bodies as the enemy from the beginning,” according to the brand.

Although many other companies like Nickelodeon, Netflix, and Lionsgate published statements in support of Black Lives Matter, Ben and Jerry’s was the only statement to address the history behind racism, acknowledge other black men and women who lost their lives as a result of police brutality and prejudice, and suggest efforts that challenge political leaders, lawmakers, families and supporters to help dismantle white supremacy.

“What happened to George Floyd in Minneapolis is the fruit borne of toxic seeds planted on the shores of our country in Jamestown in 1619, when the first enslaved men and women arrived on this continent,” Ben and Jerry’s wrote. Floyd is the latest in a long list of names that stretches back to that time and that shore. Some of those names we know — Ahmaud Arbery, Breonna Taylor, Oscar Grant, Eric Garner, Trayvon Martin, Michael Brown, Emmett Till, Martin Luther King, Jr. — most we don’t.”

The company called on President Trump, elected officials, and political parties to “commit our nation to a formal processing of healing and reconciliation.” It also called on Congress to “pass H.R. 40, legislation that would create a commission to study the effects of slavery and discrimination from 1619 to the present and recommend appropriate remedies.”

Ben and Jerry founders, Ben Cohen and Jerry Greenfield, who were arrested at a Democracy Awakening protest at the Capitol in 2016, have publicly supported the Black Lives Matter Movement for several years on behalf of the brand.

Ben and Jerry’s lovers took to social media to praise the brand for its courageous efforts in support of Black Lives Matter.

“I applaud #BenandJerrys for having integrity and courage to be straight up about social issues in America,” one user tweeted. “White supremacy system must be destroyed. For the record, I love #BenandJerrys ice cream.”

Another user wrote, “I think I’ll purchase a whole cart full of #BenandJerrys ice cream today and tomorrow and the next day and so on. Don’t support companies who do not support people of color.”

“Ben and Jerry’s really out here doing this and putting other companies that are hiding behind ‘I don’t wanna involve politics in my business’ to shame,” a third user wrote. 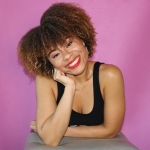 Bring in the Summer Smiling face with sunglasses and get some New Leggings!

54 mins ago The DMV Daily Staff

2 days ago The DMV Daily Staff