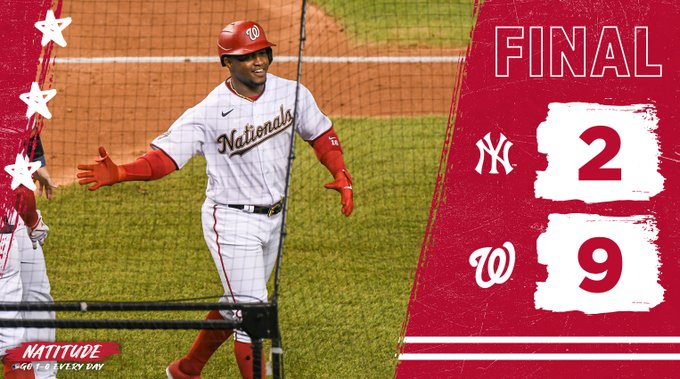 After a 4-1 loss in their season debut against the New York Yankees, the Nationals bounce back winning the second of a three-game series against the Yankees 9-2 getting their first win of the 2020 MLB season.

The Nationals got on the board first in the second inning scoring three runs off a two-run RBI by Victor Robles and an RBI double by Trae Turner.

The Yankees would score in the third and fourth inning respectively with the Nationals answering with a two-run home run by Victor Robles to make the score 5-2.

The Nats would score two more runs in the fifth inning off RBIs from Howie Kendrick and Asdrubal Cabrera respectively. Cabrera and Michael Taylor each hit home runs in the seventh and eighth innings respectively on their way to a 9-2 victory for the Nationals.

The Nationals and Yankees will play the final game of their three-game series tomorrow afternoon.

The World Series Champion Washington Nationals have been the best team in @MLB since May 24, 2019.